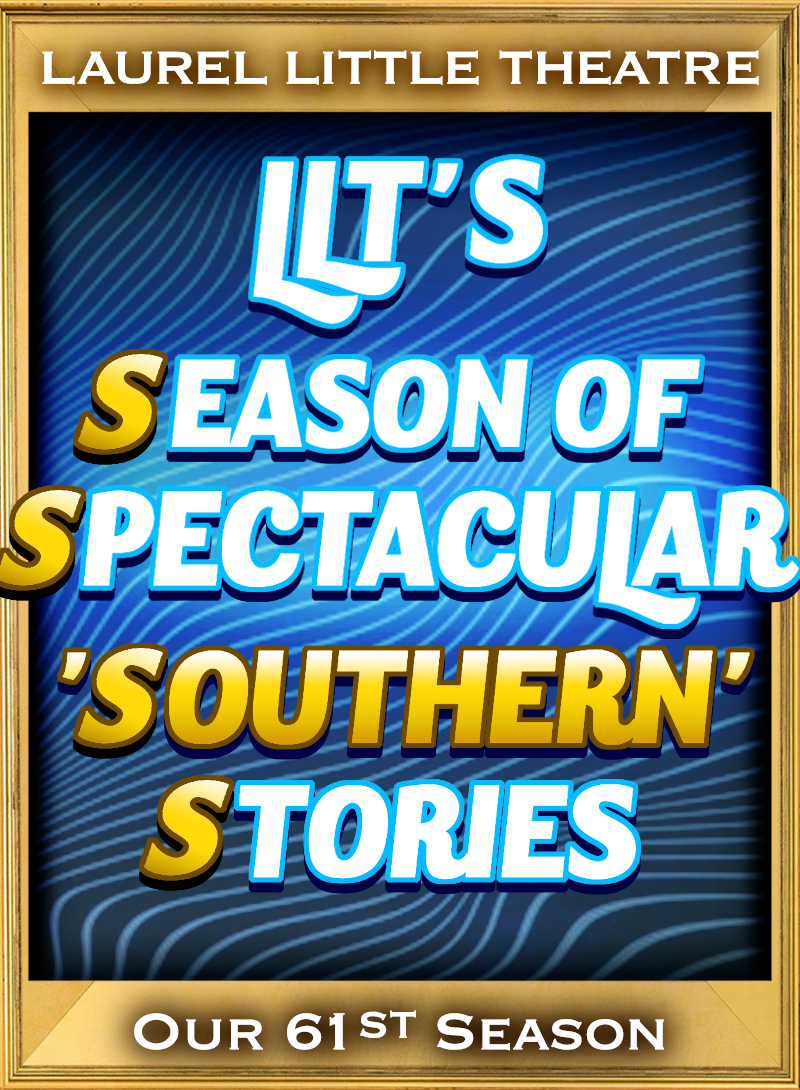 COMING UP AT THE

THE LAST NIGHT OF BALLYHOO

Would you like to receive our email newsletter and annual season brochure? 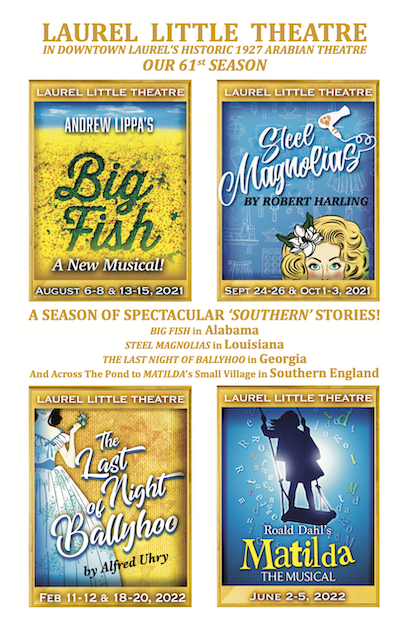 This logo celebrates our recent 60th anniversary. Out of 241 productions we've presented over the last six decades, 75 of those show titles are included here.

Are you an Amazon.com shopper?

You can
help LLT out!

Amazon has a program that contributes a portion of every purchase to charitable organizations - at NO extra cost to you.

Thanks for supporting your local community theatre!

Click here
to view the new short film by Wess Hughes and Laura Cooley on the history of all of Laurel's old movie theatres since 1907.

BLAST FROM
THE PAST 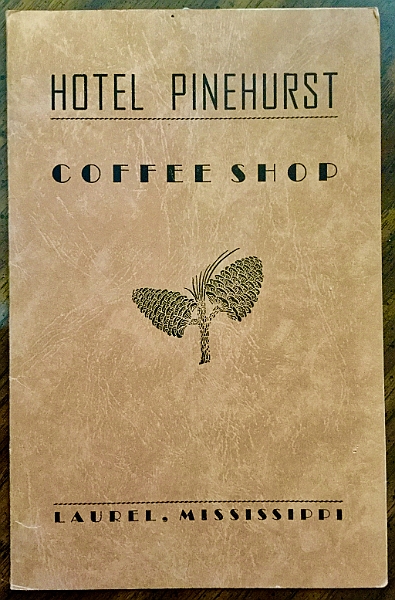 The Pinehurst Hotel had several businesses inside - including the Hotel Pinehurst Coffee Shop. How ironic that in 1961, that Coffee Shop is exactly where a small group of Laurel theatre lovers met to form the Laurel Little Theatre. For the first 15 years, our shows were presented at local schools and then the Armory Building. But in 1977, as the Arabian went out of business as a movie theatre, LLT bought it and removed seats and built out a stage to become our own Playhouse.

LLT historian Wess Hughes recently found this 1948 Coffee Shop menu at a second hand & collectibles antique store in Santa Rosa, California. Steaks and entrees for $1 or $1.50 and lunches for a buck or less! And how about breakfasts for 65¢ ??? 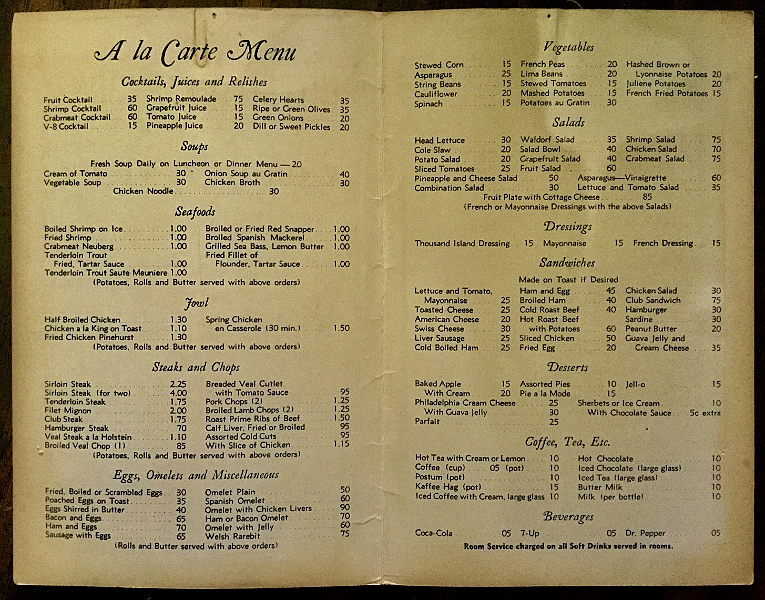 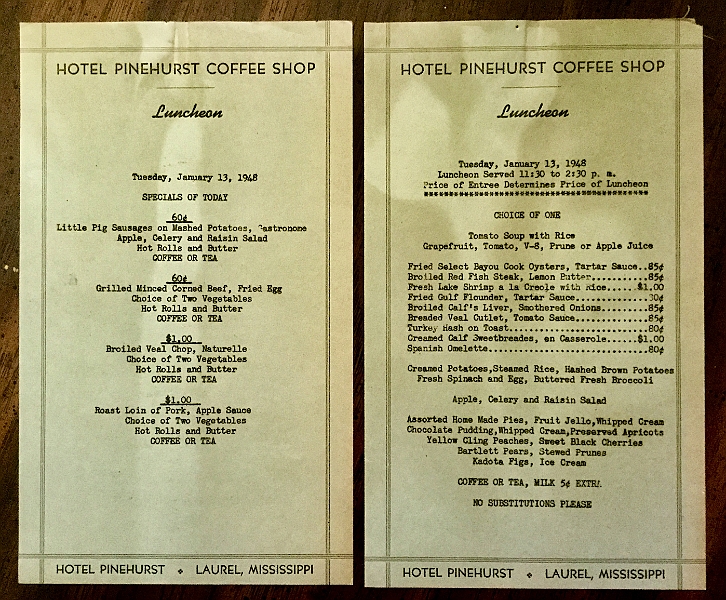 Click here to see our collection of photos of the old Pinehurst and the Arabian over the last 100 years.

Our million-dollar fund raiser to build the new PINEHURST ROOM addition to the Arabian is now getting close to the 25% mark! We'll break ground once we reach 50%. Please consider donating or making a pledge to be a part of this and you'll secure your own engraved tile that will be included on a wall in the new lobby extension. Drop a line to LLTLaurelMS@aol.com for more info.

A collection of old Pinehurst Hotel items will be on display in the new room. we've already collected a handful of things - let us know if you have any old items.


A great old post card photo of the Pinehurst Hotel from back in the 20s. This was before an addition in 1927 added extra hotel rooms over to the right along with the Arabian Theatre right behind them. The Pinehurst was demolished in 1988, but we've just kicked off our fund raiser to build our own PINEHURST ROOM addition to the Arabian--right where the old hotel used to stand. We'll even recreate the old secret side entrance that used to allow hotel guests to go straight into the theatre from right inside the hotel!

Click here to see our entire collection of LLT and Arabian photos.

GOT ANY OLD PHOTOS OR STORIES OF LLT OR THE ARABIAN???

We're looking for more old pictures of the Arabian Theatre, or any of the over 200 shows we've produced at LLT over the last five decades. If you have any, you can scan and email it to us at LLTLaurelMS@aol.com, or drop a line and we'll just borrow it long enough to make a copy and return the original to you. If you have a great story you'd like to share, write it up and send it on. We'll be sharing throughout the season on our website.


Rick Youngblood was presented this beautiful watercolor of LLT's Arabian Theatre for his three spectacular years as LLT board President. The original art piece is by award-winning Northeast Jones High senior,
Varian Fortunak!
The Smithsonian
Museum picks Laurel
as one of the nation's


with a shout-out to LLT, as well as to theatre character, Blanche DuBois.
Click here
for the full story.

A SEASON OF SPECTACULAR 'SOUTHERN' STORIES!

COVID SAFETY: With safety as a priority for audiences and volunteers, COVID precautions include: masks encouraged - especially if unvaccinated (bring your own, please!); no admittance with visible illness/coughs/sneezes; maintain distancing - lobby closed and go straight to your seats.

MISSY AND PAULA DECORATE FOR THE HOLIDAYS 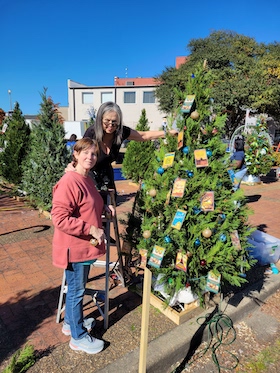 LLT volunteers Missy Sanderson and Paula Pierce help decorate LLT's tree in the "PRANCER PATH" that United Way is sponsoring in 'The Backlot'. For ornaments on our tree, they used copies of our last few season's show program covers. Over the next few weeks, expect concerts, movie screenings and Santa visits in downtown Laurel! 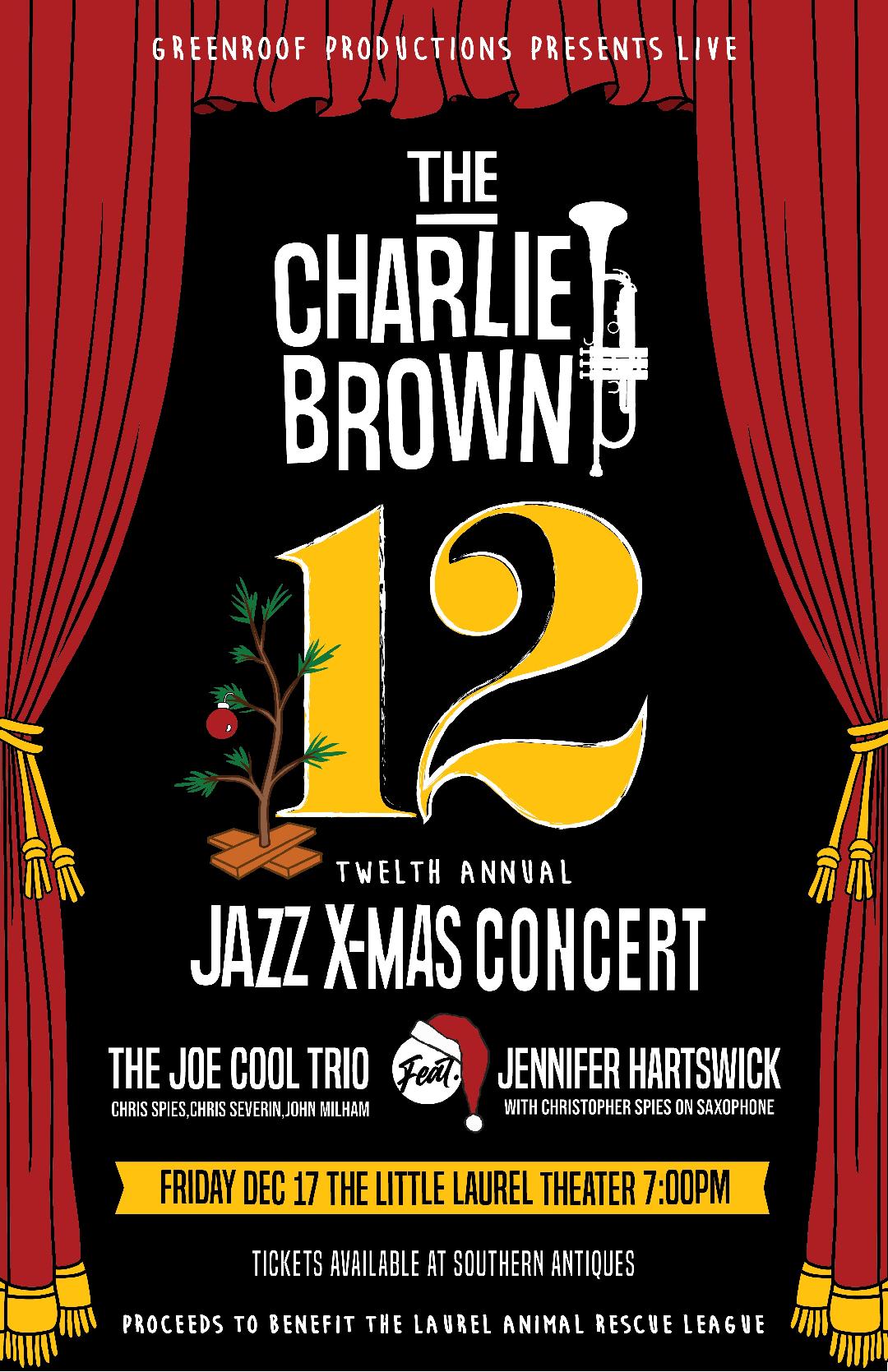 It's the 12th Annual A CHARLIE BROWN CHRISTMAS Jazz Concert! Everyone loves the famous 1965 CBS animated TV special and remember the fun musical score. The 'Joe Cool Trio' plays that score live while the animated film is shown on the big screen. Fun for kids and adults.

Tickets are available at Southern Antiques and benefits the Animal Rescue League.

NEXT UP ON OUR STAGE

THE LAST NIGHT OF BALLYHOO

A SECOND sweet and touching Southern comedy for our season! Written by the same author as DRIVING MISS DAISY, so you know it’s clever!

The story? It’s 1939, and Atlanta, Georgia, is all abuzz about the upcoming world premiere of “Gone With The Wind” – but the real big social event for many is the annual lavish ‘Ballyhoo Ball’ – a country club cotillion where the ladies ‘coming of age’ are presented with the eligible bachelors.

The posh Levy family is trying to find a date for their daughter to the Ballyhoo Ball, but Mom just doesn’t quite approve of ANYONE. Regardless of their social standing, they’re just like most every other Southern family - they bicker and they laugh, and they cry, and then they laugh some more!

It premiered in Atlanta at the 1996 Olympics Arts Festival, and then moved on to Broadway for a successful two year run.

It got 10 major nominations for the Pulitzer Prize and Tony, Outer Critics and Drama Desk Awards, winning the 1997 Tony Award for Best Play. A New York Times review said that it recalls a vintage episode of ‘Designing Women,’ the TV sitcom!

In our "Season of Southern Stories" we've been in Alabama, Louisiana and Georgia in our first three productions. Now we wrap up the year by 'jumping the pond' to MATILDA's small village in southern England.

Many kids grew up reading the book and loving the movie version about the precocious little five-year-old Matilda Wormwood as she and her fellow students deal with their vicious school headmistress, Miss Agatha Trunchbull, and their lovely teacher, Miss Honey.

Matilda is an extraordinary young girl with a love of books, a vivid imagination and a sharp mind. It’s a scrappy story full of heart as she leads her classmates to change their destiny and see just how different life can be when you take a stand for your future.

Written by the same author as WILLY WONKA, this musical won London’s Best Musical Olivier Award as well as five of Broadway’s Tony Awards. A new Netflix movie is currently in the works.

Our annual Kids’ Camp is open to students entering 1st thru 10th grade in fall 2022.

Camp registration begins in March and usually runs just two weeks until it’s filled – so make sure you’re on our mailing list to get advance notice of registration dates. Drop us a line at LLTLaurelMS@aol.com to be added.

The camp starts on May 26th – just as school ends for the summer. There’s one week of afternoon workshops and rehearsals, and then it ends with a weekend of performances. Come see these 100 lovable young actors as they totally AMAZE us every year.

You get four punches on each season ticket - allowing you to punch once per show, or you can even use up to two of your punches on any one production and bring someone with you.

Join now as an LLT season-ticket holder - you'll see all four regular season shows for an average price that's as low as $11 - $12 per punch - live theatre for less than the cost of a movie!

BE THE FIRST TO GET THE NEWS!!

REMEMBER LLT IN YOUR GIFT GIVING


As a non-profit organization, LLT has always depended upon "the kindness of strangers." We survived and thrived for almost six decades thanks to the great support of everyone in the community.

We're very proud of our historic 1927 Arabian Theatre, but we have to constantly work at keeping the facility maintained, and we have big plans to add the new Pinehurst Room extension in the next year or so. That addition will run along the south side of the Arabian exactly where the old Pinehurst Hotel stood. And, YES, ladies, there will be brand new restrooms so you won't have to stand in that long line anymore!

We'll need the help of our friends and families and even strangers to raise the funds to complete this. Remember us in your annual gift giving and in your wills and estate planning. So many of our beautiful old buildings in Downtown Laurel have disappeared - help us to ensure this one continues to thrive. We're planning a Wall of Honor in the new Pinehurst Room that will memorialize your name or the name of those you'd like to remember. Mail to LLTLaurelMS@aol.com for more info.


We're always looking for folks that would like to help backstage on sets, props and costumes. Do you sew ? Like to help slap some paint on a wall? Do a little hammering? Drop us a line at LLTLaurelMS@aol.com.


Click Here For Our Plans & Sketches,
An Update On Our Progress,
and The Donor Form

Our Current Donors to the Pinehurst room

Click Here to See Our Current Donors to
THE PINEHURST ROOM